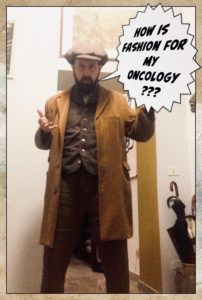 In the last month I had been living with the radio therapy bombs and now, that I finally stopped taking the heavy cortisone, I am somehow trying to communicate with you.  My head is quite confused.  Somehow I am once again attempting to deal with how my crazy relationship with the typing away of words which are passing by my brain. As I am trying to type away these thoughts they just all disappear.  Somehow there must be a new strange type of meditation to make this happen with this half broken head.  So let’s all have some patience.

The other day I received a rather random e-mail from a young doctor who I had encountered a few weeks ago. In fact, now that I think about it, while I had gone at that hospital for a meeting to look at my thyroid, I actually met the two very young doctors  who sat right next to each other in their very large room.   That morning they must have assumed that they were about to meet another of their normal patients.  Where they would only really need to talk about my blood results accounts, just like a case for them to read.  My memory is pretty bad but somehow I do recall that those two ladies at that meeting must have been smiling at me somehow.  I guess that I must have been quite particular. Somehow I must have communicated my own energies during such meetings to them.

In theory the relationship with doctors always ‘needs’ to be quite straight and cold.  Every day their own work does make them face a whole range of very different patients, but obviously I do think that I am a pretty extraordinary case for them.  I am aware that their own job does not really allow them to express their emotional surprise, but ultimately, once I walk out of the room they must talk about my extraordinary optimism considering my 95% chance to die soon.  Right?  Actually I am sure that most of them do not care about me, but obviously my own Ego centric is actually still healthy for me while walking through this gigantic hospital world.  And I am sure that those young female doctors are somehow curious.

For some random reason I remember quite clearly how the ceiling of that particular meeting had been very high in that room.  And maybe I thought of that day because now I remember to tell you that the thyroid is actually one of those little and powerful things that can control our energy. Sadly all of my radio or oncology teams never ask me about any details of these little bit of nodules which lives below my throat. I take those pills every day, and it potentially can change how much energy I have in my body, but ultimately I do understand that it is not the priority for their oncological worlds.  They don’t care.  I have been living with my strange Thyroid since the first operation in the US , and so it must have been my mother or some other friend who have helped me to set up that meeting for the underactive thyroidssome 6 months ago.

Ultimately, in that doctor’s e-mail, she told me that she had tried to purchase a copy of The Finch In My Brain on line but could not somehow manage it.  Yes, it has not come out in Italy yet and so one has to get it through the UK website for that.  But I did tell them that the next time I would pass by the hospital I could bring one of the hard-cover which I still have at home.

My computer’s voice, Ava, continuously reads the e-mails that I choose.  Her voice never changes when I ask her to do the same particular bits a few times.   Her American voice reads me that particular e-mail from that doctor a few times but that particular one always feels quite professional.

For some reason, during that meeting, I obviously must have told those particular thyroid doctors about having written the book.  I really don’t remember what they looked like but was I wearing something particular? I am pretty sure that I shaved the edges of my beard and washed up that day.  I often do that before going to that hospital.  What was I wearing? I am sure that it was something that I had sowed together.  I don’t know which color, but am sure that I had one of the hats, and the waistcoat. The big trousers that I had been sticking fabrics on the knees were actually in London so they could not have been those.

A week later I had to come into the Oncology for one of those meetings of my blood,  and so I sent an e-mail to tell those Thyroid doctors that I would be passing by at 12am.  I strangely felt quite excited to actually just finally see them.  Was it both of them who actually wanted my book? I do have the sensation that they were going to share it together.  Maybe at some point I might have told them that in fact I would give it to them at the same price that I had recently paid myself.  Not too expensive for a hardcover version.

That day, after I had given away my huge blood for the vaccine team, I sent that Thyroid doctor an SMS and walked to their building. Which one of those two ladies were going to come out? What was her name?

Fortunately, as she came out of that building she looked straight at me with a smile, which obviously allowed me to remember her.  As she got closer to me I pulled out the Finch in My Brain, where at the front page I had signed out, in Italian, my own curiosity  “Dear Doctor,  I am very curious to hear what you think about the different parts of this story, as I have never read it myself. “  But as she met and I handed her the book she asked me to walk around the corner with her. She explained that it was not really correct for us to exchange money while being there.  As we got there she told me, while holding that book in her hand “You know, I am very curious for this book as my father recently died with Glio- Blastoma-Multiforme…” and after a short pause “ and my mother had that GBM 6 years before.”

After a bit of pause I reply “so are they both dead?”…

She smiled “Yes.” … “That is why I am so curious to hear about your story.”

The relationship of that encounter was truly very powerful for me. As I walked away from that encounter I was simply blown away.  It became clear that the Magnificent details of Martino was not relevant to the curiosity of this doctor.

It’s just the randomness of an entire family with that kind of aggressive cancer that is for me and my own ego part of my own very social life.