My walks through the world of Magnetic Resonance Imaging machines 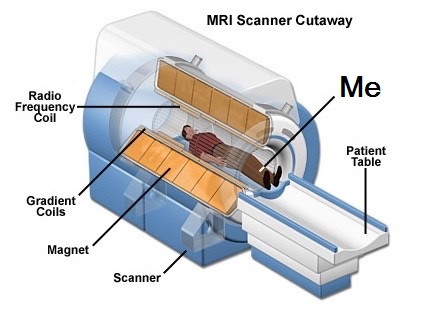 (This blog post was inspired by spending a lovely day in various hospitals with the community of the Brain Tumor Research, UK)   I have noticed, or actually people have made me aware that a few days before my next MRI, my mood changes. Well, it could even be a few weeks before, and yes different members of my wider family can describe my character changes in their own ways. But generally, I am a less charming person. There is nothing that I can do to prepare for it. Nothing that really helps. I have tried but, come on, laying totally still for half an hour with… Bang, Bang, Bang, Bang…Faz, Faz, Faz, Faz, Faz, Faz,…Wong, Wong, Wong, Wong… Eee, Eee, Eee, Eee. The nurses, after laying me down and putting a needle in my arm always stick thick material by my ears, as that sound is as loud as 125 decibels, like being in a concert hall listening to a rock band.  They are really the worst and most unsynchronized sounds I have ever heard.  Trust me, I have laid my brain, all locked in an MRI  machine every 3 months for the past 6 years, and I have never found a groove that I could recognize in any way. You know those very abstract modern composers like Stockhausen or Steve Reich, whose creations just sound weird, well those, if you really want, after a bit of philosophical research you can actually discover their logic.  But, in every possible way, there is no logic in those extremely loud sounds. Ok, let me step back a second. The reason why I often find myself walking down to the underground floor of hospitals, and embrace their MRI machine is because, at least in theory, they are able to narrate visually what is happening in my brain. Particularly, doctors and technicians recognize if and how my brain is being attacked, which then opens the discussion of what can I, and all of them, can do about it. One of the main problems I have as I stand up from that MRI machine is that I have no way of receiving any results. I have often tried to gracefully engage in a discussion with the technicians as they frequently seem impressed that I can still talk normally (considering the rather large bird shape hole in the left side of my brain).  But sadly, none of them can really answer as they don’t have a copy of the last MRI next to them.  And, in general, it’s another person who does that job anyway. Waiting an entire week for the results of that machine is like walking away from an exam at school.  It just forces me to continuously doubt myself. Perhaps I might have neglected some details  (have I been eating something wrong?).  At night while dreaming, I occasionally see the faces of the doctors staring at me and moving their head back and forth, right to left. What can I do? The results are created by that super powered machine so, in theory, what is written or rather visible should be 100% clear.  It’s a machine.  But, once again, that is not the case.  Different doctors and different radiologists have given me quite different explanations of the images that appear to highlight the details of my brain. It’s like one of those creatures in Lego that my boy creates with his own imagination. Different spectators do interpret his artistic projects with love, but as if they were different stories.  “It’s obvious that it’s a flying train, not a spaceship”. Yes, in part it is that split between a glass being half full or half empty.  It could be a reaction from the Radio-Therapy bombs that stress out all the parts of the brain, or maybe… it is bits of dead cancer that just hang out there slowly starting to disappear, or obviously some new posters of the cancer cells that are completely untouched by all the pills and Radio bombs that I have taken. So, I can’t reiterate enough that the tone of voice and movement of the eyes of every doctor, while elucidating such data to a patient, is profoundly important for their patients. The only way I have found to embrace the world of high decibels is by doing what my boy does… thinking of it as something else.  Inspired by the calm of the nurses as they lay me down, I occasionally manage to feel as if I am on my own flying train where I am allowed to repeat my mantra and Meditate. (I guess my next Blog will have to be about my relationship with meditation 😉