Is this Evil versus Good… ? 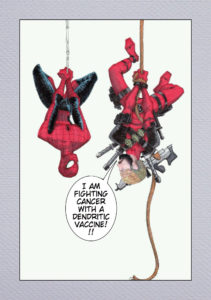 It is 6 years that I have been living with a bunch of aggressive aliens who have squatted in my head. The way that I am talking about them is most probably because during the early 80s I grew up with a certain love for comic books. In fact, right now there is a good part of the Marvel and DC characters which are overwhelming a section of the film world, only in part targeting my age group. In fact, as I hang out with my wonderful 10 year old boy he often expresses his excitement for those particular films which all of his friends use as physically agitated role-playing games.

Today I have been told by the top end oncology professor that I have to get ready as in 4 weeks I’ll once again need to jump into the surgery department of the hospital. So, I will again put my faith in that world and attempt to understand the details of the battle in my brain. Considering that after my second surgical war I realized that I could not read the text that I was typing away, with some calm I’ll pull out my new, computer based superpowers – which did allow me to write the book The Finch in My Brain. Yes, this little blog is now making me focus on how my new vision of these battles has now been forced to embrace the true complexity of reality.

And yes, I am aware that in the world of comic books a change of the hero’s basic character is definitely not allowed. For many social reasons a good one must always keep good. In fact, changes are depicted as the outcome of a sinister force that threatens to undermine a noble, pre-existing establishment. Which makes sense as many of them were created during the world wars. Throughout history social outrage has always come out when a paradigm shift is being presented. But that is in fact the only vision that will keep me alive. Yes, some of the superheroes will need to change their attitude, to embrace the different view and who knows maybe even publicly declare their radically different sexual attitudes. And I myself have a “sentiment”, that I want to save the galaxy, so I’ll put on some spandex for this war as I do hope that my new oncological narrative will not scare any of those old school anti cancer pills that are ‘proven good’.

Yes, I am aware that glioblastoma multiforme (GBM), is the most aggressive cancer that begins within the brain (the evil hero). And sadly, what just about every website that I find on Google says is that despite maximum treatment, the cancer usually recurs and that the most survival following diagnosis is 12 to 15 months, with fewer than 3% to 5% of people surviving longer than five years. But I am still alive after 6 years. And, as my oncologist today made me understand it might not be due to my 5 years of very expensive drugs Themodal that has been really keeping me alive.

In fact, what that top oncologist here in Italy told me Today is that the main reason why I am still alive might be that 6 years ago, I took part of a Dendritic Vaccine experiment. Yes, with two brain operations I have a good excuse for not completely understanding the words that deeply explain how exactly this new type of cure works. But, considering that I have today also been told that some new part of the tumor has now started to grow, and that I’ll need to have an operation in one month’s time, here it goes. I’ll attempt to explain why, actually from a quite radical if also ridiculously demonic style I should actually appreciate this new, rather smaller surgery. Oh yea, it will probably be while I am awake once again 😉 So maybe like a super-hero I’ll get to sing a lovely song with a bad tone of voice while they are cutting particular bits from the left side of my brain.

The central part of this Blog is exactly about those particular evil bits in my brain. During the next operation, the lovely crew of the Dendritic Vaccine will be given all the cancerogenous parts that will be cut out. They will immediately bring them to their studio and start working their magic. They’ll turn them into a vaccine. You know, the basic concept of any vaccine is in fact exactly that. To somehow embrace the bad part in a way that the body itself learns how to fight against it. But what makes this drug particularly powerful is that it will be created exactly from the cancer that has been squatting and growing on my own head. It will have grown there, in that area between the part of my brain where memory and visual zone function. And that is why, after two operations I can no longer read or remember what I just typed away just now.

In any case, the advantage of having this operation is? What was it again?
You know, keeping positive thoughts ahead is not the simplest part of the process as everyday it really does need some calm and possibly also some kind of meditation. Fortunately, the computers are pretty cool these days and, with a bit of patience and some pretty flat voice they can give me new powers and remind me what I was attempting to tell you.

Oh yea, now I remember that what I will have to do is to embrace the evil and teach it to come back and fight for the positive side. As it is this rather scary adventure with a surgery that now seems to possibly be the source from which I can stay alive for a while longer by attempting to inspire new research for the entire galaxy.