Right Before the third adventure in the Brain… 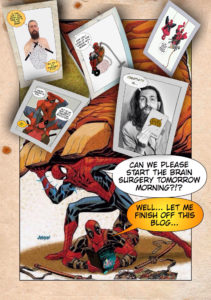 The number seven has been stuck in my head during this Day. The six single numbers that had arrived to that seven are interesting as they are completely neglecting the eight and the nine that would come after them. But I guess that it is the time that passes by to create an entire week that perhaps describes to me why I have not been able to take that last number out of my head.

It is seven days that I have been living in this room in the large Roman hospital. And strangely it was exactly in 1907 that they had finished constructing all these three story buildings. Their architecture is truly calming as it has colonnades as roof structures of a pathway that leads from one building to the other which are all supported by beautiful columns. During the two world wars it must have been extremely useful to have built a huge hospital just a quick walk away to the main central train station Termini.

As I arrived in the first floor of the neurosurgeon part of this hospital, seven days ago, I walked in with my expectations. It was exactly seven years ago that I had entered and lived in this space and so I remembered quite clearly the role that I would be playing. I was conscious that as soon as I would speak out my name I would be very quickly recognized as ‘one of their patients’. And as I left the house for this new adventure my mother deeply expressed to me that she was obviously going to accompany me. After nodding my head to state her understanding, I very calmly spoke out to her that it was in no way possible. Her own emotions could not accompany my self-made calm during that short journey to the hospital.

My assumptions in entering that building was that I was going to put on my comfortable pajamas, lay on a bed and in that role, at some point meet the doctors who are either covered with a white coat or, if they are in a Neurosurgery day are all kitted up in green cotton and dark blue plastic slippers. As a man laying on a bed, the doctors would pass by with their own crew of assistants, students and mostly younger followers, and tell each other the details of my imminent brain operation.

Every single day of this week my own personal aim was to remember what I needed to actually ask them. I needed to have my questions ready so that when their gaggle would ultimately appear they would not just quickly pass by my bed and leave me overwhelmed by words that I do not completely recognize, understand or even vaguely remember from other such meetings.

So it has been seven days now that I have been expecting to meet any doctors who can calmly explain to me what they need to cut out of my brain and how. But that is not at all what these seven days have been. Nothing at tall. I have learned that the reason why none of the neurosurgeon have come to visit me is that they actually need to see a latest MRI which, in this extremely busy chaotic hospital, has not been possible. There must have been an endless amount of urgent cases that must have pushed me away.

So this is why I have been meditating intensely during the past seven days. In fact I need to thank the transcendental meditation group who have allowed me to very slowly embrace the psycho dramatic narrative world that I am living in. This room has an extremely complex reality and what makes it continuously overwhelming is the uniqueness of each person’s meaning of life. It is in this calm, where everyone is forced to have a relationship with death. All the patients here are profoundly afraid but each one in their own particular way. Their own characters, which I most definitely do not know, have reacted to their clinical prognosis, with their own particular emotions.

It is four of us. Four males. All taken care of and managed during the night and day by females. And in this room there is one of us who is surrounded by machines and never ever moves any part of his body. The other three of us do attempt to just completely ignore his presence but nevertheless we are reminded of his human presence by the voices of those lovely nurses as they do continue to have chats with him while they are taking care of his body and veins.

Last night I had a dream, a flash back as it was almost exactly 7 years ago when I was laying in this hospital with three men… and the young nurses always entering the room for poking and measuring everyone with a good mood. It was in fact this place where 7 years ago I started writing away notes to friends to express my adventure in this hospital where – to this day – all the clocks that are in all the pathways are still stuck on a single time. And this is how I had narrated it before that second operation.

“While I was walking through the endless series of doors, I noticed that there is a clock on the walls of every hallway in the hospital. Partly to avoid thinking of anything more intense, I pondered how these would illustrate the central function that time has in the organization of this medical institution, both symbolically and practically. The problem being when you notice, as I did on my walk, that the identical clocks indicate: 10.20 a.m. or p.m., 9.07 a.m. or p.m., 6.38 a.m. or p.m., 12.29 a.m. or p.m., and 4.04 a.m. or p.m. Not one single clock indicates the correct time” Page 170 of the Finch in my Brain.
In fact, here are the nurses with a machine to check the pressure in all of our ears. And as I am typing away this blog they are asking me to stand up for a few minutes as they are redoing the beds. It was exactly 7 years ago when I started to type away my reality and share it with friends. And I guess that it is an act that, right now I just feel instinctively to do. I am dependent on it and while I lift up my eyes and look at the depression of the new colleagues who are lying on their beds near me I am forced to remember how special is the energy of my super power.

It was from that moment seven years ago that I learned how that strange type of narration could actually end up changing my priorities in my life. It forced me to focus on a part of a my overly dramatic life that would be somehow useful. And by doing that I learned to distract myself from some extremely negative oncological statistics that once again live all around me. While these days my flat mates only can tell me of the potential drama in their life, I quickly find them smiling when I physically show them the various tasks that occupy me. Their faces change as I present them some of my new badly done sowing of fabrics to create a hat, and then continue my smile as I show them how silly I am with my handicaps, which have made it very difficult for me to write a book. So they start telling me of the rhythm they use too cook proper roman food when they are at work and how, back at home they do their gardening surrounded by their two beautiful dogs.

So it was almost exactly 7 years ago that I have been living in this parallel oncological brain tumour reality. It is 7 years ago that I woke up with a complete human reality paradigm shift which now, these days in this hospital I am deeply using as a protection.

Before arriving here I had understood, thanks to my sister that their strange text in the MRI explained that I am here not because I have a further growth of my old brain tumor. This is a different growth. A separate part, not so far away from the other one. It is still on the left hand of my brain but a bit more forward. Closer to my left eye and ear. Mostly, what generally happens in that part of the brain implies that – I might get some of my emotional balance and memory cut away. So, this time around my character could in some way, even if non visible, profoundly change.

And so while typing away this text that I can not read myself, I am forced to remember how every possible handicapped could transform, in some calm way into yet another super hero like power that I will have to, once again find a way to embrace.

And now this transformation is scheduled, I will go to surgery at 8 o’clock tomorrow morning.